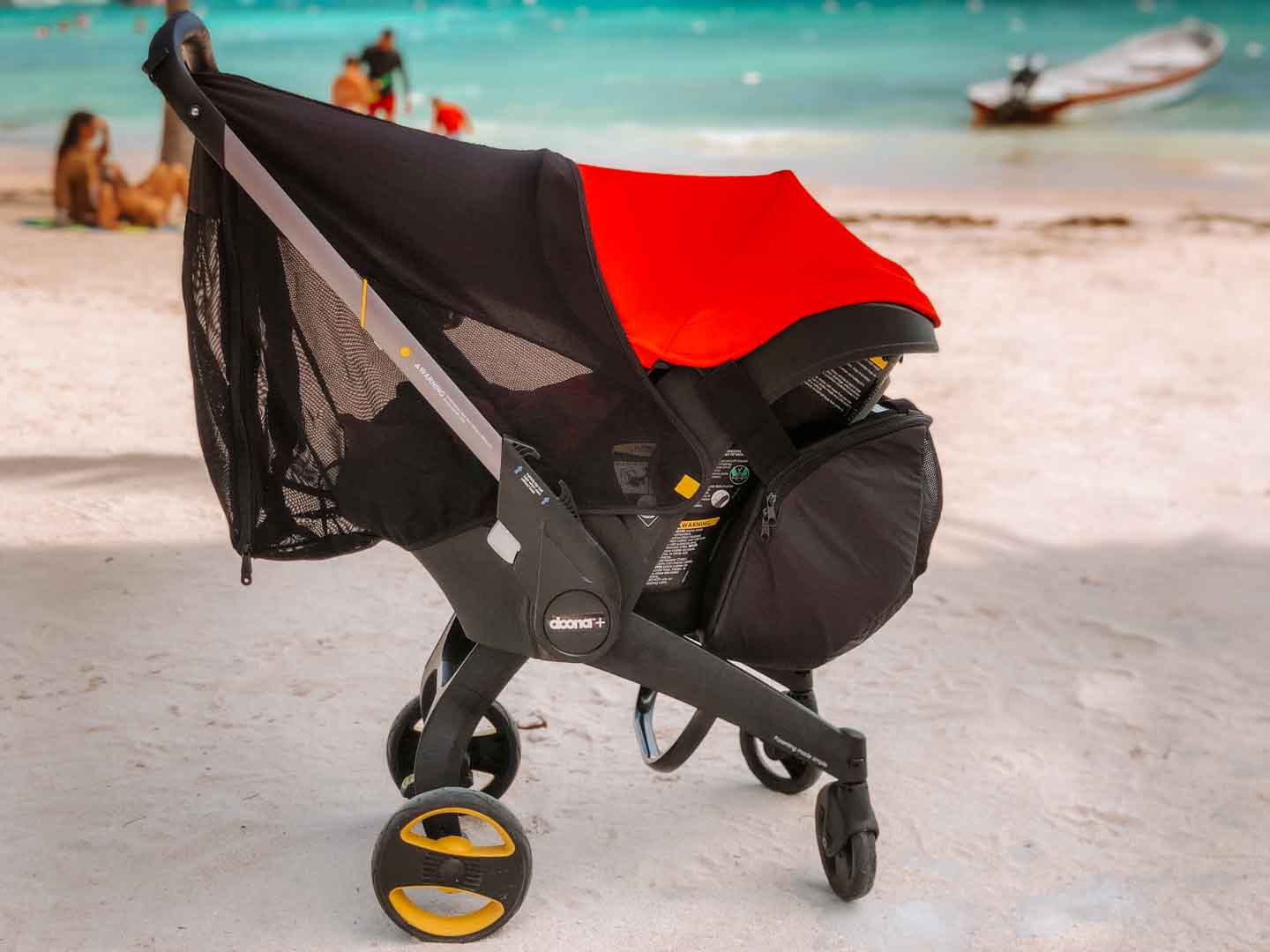 Every time I’m out and about with our Doona Car Seat Stroller I get tons of questions, and requests for demonstrations on how the Doona stroller works. People are always skeptical is it really that easy? Can a car seat really instantly be a stroller too? YES, yes it can!

I am a real mom that has been using the Doona car seat stroller exclusively with my son from 3 months to 17 months old and now with my daughter since birth (brought her home from the hospital in the Doona). I CANNOT imagine life without the Doona car seat.

Back to the Doona, in this Doona review article, I’m going to go over everything you need to know about the Doona and why it truly is the best car seat stroller combo for newborns.

How much does the Doona cost? – The Doona cost $550, it isn’t cheap I’m not going to lie, BUT you won’t need to purchase a traditional car seat ($200+) or a stroller until they outgrow the Doona which is typically one year.

Is the Doona stroller worth it? Yes, the Doona is worth every single penny! Keep reading and you’ll learn why the Doona car seat stroller is worth it.

Can you use the Doona car seat exclusively as your main car seat? Yes, and you should! There is no reason to purchase another traditional newborn car seat. Save the $200+ you’d pay for a traditional car seat. You can purchase an extra car seat base for $149 here.

What age is the Doona for? From birth to 35lbs. We highly suggest using the Doona from the get-go with your child. Plan on bringing your baby home from the hospital in the Doona. The hospital will require you to bring your car seat into the hospital, in order to go home with your baby they will do a baby car seat safety check.

Is the Doona car seat stroller safe for newborns? Yes, the Doona is safe, if it wasn’t I sure wouldn’t be using it. The Doona is considered one of the safest car seats on the market. It features 3-layer side impact protection, anti-rebound bar crash testing, a superior 5-point safety harness, and an ergonomic infant car seat.

How long can a baby stay in the Doona? This is going to vary from child to child. The weight limit for the Doona is 35lbs/16kg. For most babies, this will be somewhere between 12-15 months old, but for those parents with little peanuts, some have been able to use the Doona up until 24 months. We have been using it for 17 months and our little guy is just about outgrown it.

How heavy is the Doona car seat? The Doona weighs 16.5lbs, I agree that sounds heavy considering there are traditional car seats on the market that are under 7 lbs. BUT you will only be lifting the car seat from the ground into the car when locking it into the base. You honestly will never be carrying the car seat so you won’t be bothered by the weight.

If you opt for a traditional car seat you will be carrying it a ton and that gets heavy & old real fast. Just think of the distance from your house to your car, from the parking lot to inside the doctor’s office. Now just imagine being able to stroll in.

Sure you could attach the car seat to a stroller but you’d then have to have a stroller in your car at all times AND you’d still (most likely) have to carry the car seat from your house to a car. Save yourself the hassle and your arm and just get a Doona car seat stroller.

Is the Doona airplane approved? Yes, it is. It has the approved aircraft sticker on the back of the Doona as well as the instructions on how to securely put on the airplane seatbelt.

Does the Doona stroll down the airplane aisle? Yes and No. I would say half of the flights we’ve been on it has fit down the aisle and I was able to push it all the way to my seat. 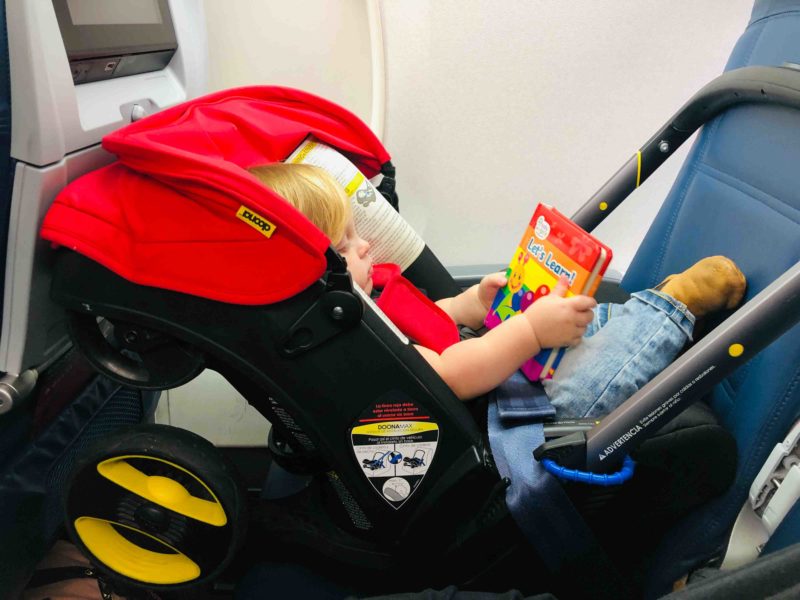 We used the Doona with our son Atlas exclusively from 3 months to 17 months, and with our daughter since birth. I originally was using a traditional car seat which I did really love (Clek Liing), and I didn’t start using the Doona until our trip to Mexico when he was 3 months old. After using it for the month’s vacation in Mexico I really was pissed off at myself for not using it sooner.

For some reason, I had it in my head that the Doona was to use when traveling, and therefore was saving to use it on our first family trip.

Every pregnant friend I see I tell them they need to get a Doona, and usually, after they see my Doona in action they add it to their baby registry.

I LOVE LOVE the Doona. Our next baby will come home in the Doona stroller!

Click here to see what breast pumps your insurance covers

Is the Doona really that easy to convert from car seat to stroller?

The Doona goes from car seat to stroller in a matter of seconds. I too was skeptical, but now I don’t even think about what I am doing it just comes naturally and takes seconds. Not only can I easily convert the Doona car seat to a stroller but my husband, mother, and in-laws all can too.

The first time I tried it at Buy Buy Baby I did struggle, but that was because I didn’t know what I was doing. If you try it at the store and can’t get it to work, ask for an associate to show you. It does take a few times to get the hang of. 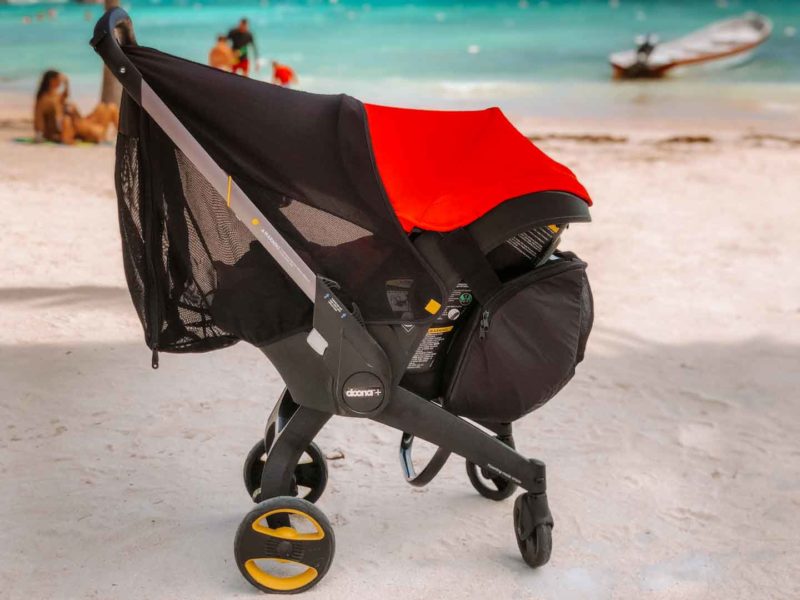 Tips for Converting the Doona Car Seat to Stroller

This is the first thing I do. It actually isn’t necessary, but it’s good to do so that when you pop it back into stroller mode the brake is automatically on.

If you read my Doona accessories article here, you know my #1 Doona accessory is the Doona snap-on storage. If you have it attached to the back of the Doona you need to remove it before converting the Doona from a car seat to a stroller.

I often forget to take it off first, and then when I try folding the car seat down I realize I can’t because it’s still attached. It is no big deal, I just remove it then.

3. Make sure the wheels are straight

If the wheels aren’t straight the Doona won’t lock into the car seat mode. You won’t hear that clicking sound which means it’s folded down.

Lots of people complain that the Doona stroller doesn’t have any storage or even a cupholder. But it actually does, you just have to purchase them separately. I have an article dedicated to my favorite Doona accessories. You can easily add a snap-on storage bag and a cup holder for $50. Traveling with the Doona

Being travel bloggers, the Doona is one of the best inventions ever! It makes traveling so much easier. You no longer need to check a car seat AND a stroller, just bring the Doona car seat stroller and you’re set!

If you plan to fly with a newborn you’ll want a stroller not only for your trip but at the airport. The Doona travels great, we suggest purchasing the padded Doona travel bag (pictured above). We gate-checked our Doona on several flights and have had no issues.

If you are renting a car on your vacation or taking a shuttle you can install the Doona car seat without a base. You just use the lap-shoulder belt European installation, see the instruction manual for directions. There is no need to travel with the base if you don’t want to. When we went on a 5 week trip to Mexico we did bring the Doona car seat base. We rented a car in Mexico while we were there and knew we’d be in the car every day.

The base and Doona both fit in the padded travel bag and that is free to gate check at the airport. It won’t cost you any extra to bring it with you,  the only downside is you’ll have to carry it through the airport if you choose to gate check it. I warn you the bag is huge, but worth it to keep the stroll safe.

If you are going on a road trip with a newborn you most likely won’t have a ton of free space in the car. If you had to pack a traditional stroller that would eat up a good amount of trunk space. Just another reason why we love the Doona stroller.

How Does the Doona Drive

We really put the Doona to the test on our one-month in Mexico trip. We visited the gorgeous Isla Holbox, which is an island with no paved roads. That’s right it is all sand & gravel.

We drove the Doona up and down the beach in the sand and really didn’t have too many issues. Of course, when I was in deep loose sand I’d have to lift it over but when we were in packed sand it had no issues.

I was a little nervous about the effect all the sand would have on the stroller in the future, and I am happy to report 3 months later and no issues. However, if we were to have an issue Doona replacement wheels and parts can be purchased here.

The Doona turns really easily and easily does a 360 turn. If our son is being fussy in the house we will put him in the Doona and push him around the house in circles. It just takes up so much less space, I would never be able to push my big stroller around the house without hitting things.

So yeah the Doona car seat really is that awesome. I am nervous for the day our daughter Isla outgrows it…but excited for the day I bring home another baby from the hospital in it (NO, I’m not pregnant mom).

Do yourself a favor and purchase a Doona, just click here and hit buy! And make sure to start using it from day one.