Heading to Los Angeles aka L.A.? Looking for the best things to do in L.A. and how to make the most out of 2 days in L.A.? We just spent a weekend in L.A. and put together a guide to 2 days in L.A., and we were even able to travel to L.A. on a budget.

The words L.A. and budget don’t typically go together in the same sentence, but they can! Most people think of L.A. as Hollywood  & Beverly Hills (which can be expensive), but we are going to show you local hidden gems that will help your L.A. budget.

Below we have listed every time we broke out our wallet, all prices are for two people.

*Commute times below without traffic* Once you land in L.A., hit the ground running as there are so many things to do and see in L.A. Try to land in just before lunch. Pick up a rental car at LAX and jump on the Pacific Coast Highway (PCH), one of America’s most famous drives, as well as one of the most scenic drives in the world.

We always rent with Discovercars.com. They have the cheapest rates and free cancelation. Book in advance to secure the lowest rates. Park the car right on the street around Abbot Kinney Blvd. There are several free parking areas and meters. Just make sure to read the signs and make a note when your parking expires, as getting a parking ticket in L.A. could put a damper on your trip. The walk between Venice Beach, Venice Canals, and Abbot Kinney Blvd is really short. Just wander around the streets of Venice, and you’ll find some amazing street art. Make sure to make it to one of Venice’s most famous street art pieces, the love wall/bleeding hearts (address: 1239 Abbot Kinney Blvd.). There are tons of good photo walls in L.A. Keep your eyes open. After you’ve worked up an appetite, head to one of the many street food trucks for a cheap bite to eat. We got some amazing Korean BBQ tacos for $2.50 apiece, just enough to hold you over until dinner. Grab a taco or two and head on over to the Venice Canals. The Venice Canals are one of L.A.’s hidden gems and are just a short walk from Abbot Kinney Boulevard and Venice Beach. The Venice Canals in California are just like those in Venice Italy. Gondola boats docked outside gorgeous homes on the canals, and picturesque bridges over the canals.

The canals were built by Abbot Kinney back in 1905. There used to be many more canals, but they were filled in when cars became popular. The canals were renovated in 1992 and are now one of L.A.’s hidden gems. No visit to L.A. would be complete without strolling down the boardwalk at Venice Beach. Venice Beach is like no other beach. Anything goes in Venice Beach. Head to Muscle Beach to see some of the most ripped people ever. One of my favorite things to do in L.A. is people watch, and Venice Beach is a prime spot for good people-watching. You could easily spend a day in Venice Beach. A quick 10-minute drive from Venice Beach is Santa Monica Beach. Head to Ocean Drive for some drinks while you watch the sun sink into the ocean. We had drinks at Blue Plate Taco, which is located right on Ocean Drive – a prime spot for watching the sunset. There are several places that offer happy hour specials as well, but margaritas with a sunset view were worth the price to us. Once the sun has set and you’ve finished your drink, head down to Santa Monica Pier. You can’t miss the iconic entrance. There are several restaurants, rides, games, and of course, the Ferris wheel. The iconic Father’s Office burger is a juicy dry-aged beef patty topped with caramelized onions, arugula, and some tasty Maytag blue cheese. We highly suggest that you order the meal with fries. Their fries are served in a LARGE frying basket with the option of super skinny fries or sweet potato fries and a ridiculous addicting roasted garlic aioli dipping sauce. Father’s Office Address: 1018 Montana Ave Santa Monica, CA

Try to find free street parking, but if you can’t, several parking structures offer free first 90 minutes of parking and an additional $1.25 for every additional 30 minutes. Don’t park down at the Santa Monica pier -it will cost you an arm and a leg. Get your morning started with some of the best donuts in L.A., and the prettiest if you ask us. California Donut has been a local favorite for over 30 years, baking up crazy fun hand-cut donuts. California Donuts is the perfect budget-friendly breakfast, and they are damn good too. Classic donuts (glazed, cinnamon roll, raspberry filled, etc.) are only $1, and the fun specialty donuts (panda, chocolate bacon, Reese’s, fruity pebbles, etc.) range from $2-$3. With your fresh donuts in hand, head to Griffith Park to have breakfast in the park. Hike or drive up to the Griffith Observatory for some of the best views of L.A. Griffith Observatory has amazing views of downtown L.A., the iconic Hollywood sign, and on a clear day, the Pacific Ocean. The best part is it’s free and has ample free parking. Griffth Park has over 53 miles of hiking trails and is one of the largest urban parks in all of North America. Some hikes are easy, while others are very difficult. Some take all day and others less than an hour.

If you have time, you can hike right up to the Hollywood sign from Griffth Park on a 6.5 miles hike that takes an average of 3 hours. Griffith Park Observatory Address: 2800 E Observatory Rd, Los Angeles, CA Try to find your favorite Hollywood actor star. There is ample metered parking on and around these streets. We pulled into a meter that had remaining time and only had to plug it in for a few additional minutes. It’s a great place to pick up some cheap Hollywood souvenirs. Keep strolling down Hollywood Boulevard, and you’ll eventually end up at Grauman’s Chinese Theatre. There are more than 200 Hollywood celebrity handprints, footprints, and autographs in the concrete. It’s kinda fun to see how big or small some actors’ hands/feet are. They look so different on screen. 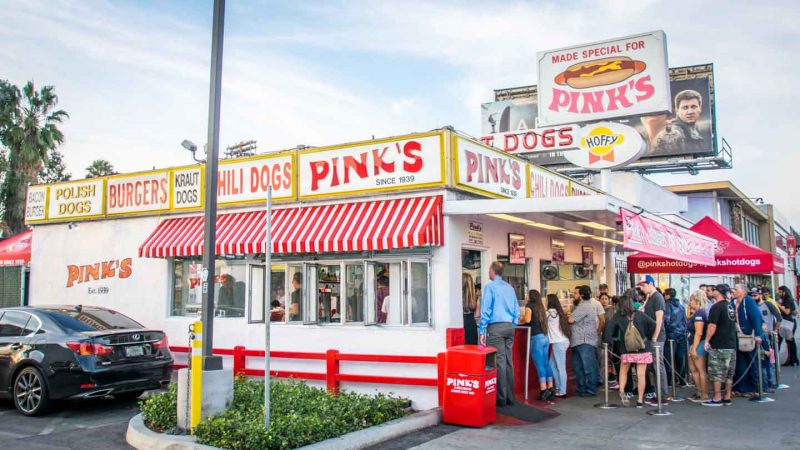 Grab lunch at Pink’s Hot Dogs, one of L.A.’s landmark restaurants and even listed as one of America’s best hot dogs by Travel & Leisure. Pink’s has been serving up the best hot dogs in L.A. since 1939. Their most famous hot dog is the “Pink’s Chili Dog,” topped with chili, onions, and mustard. All of Pink’s hot dogs are kosher, 100% beef, and 100% awesome. Prices back in 1939 were only 10 cents a hot dog, but now they range from $4.40 for the famous chili dog up to $10.25 for a three hot dog specialty dog.

The menu has several hot dogs named after Hollywood celebrities who have visited. Like: Rosie O’Donnell Long Island Dog, Ozzy Spicy Dog after Ozzy Osbourne, Martha Stewart Dog, etc. We got the Lord of the Rings dog and the Brando and an order of French fries.

There is usually a line at Pink’s, but it’s well worth it, and it moves quite quickly. We waited in line for about 20 minutes. Parking can be tricky as it’s at a busy intersection. There is a free parking lot behind Pink’s or meters on La Brea. Address: 709 N. La Brea Ave., Los Angeles Well, our 2 days in L.A. are up, and it’s time to gas up the car and head back to the airport. On our 2 days in L.A., we drove exactly 150 miles, which included a few wrong turns due and several traffic jams. It’s worth looking at a few gas stations for the best prices. We noticed prices really fluctuated between neighborhoods.

Most L.A. gas stations have a cash price and credit price. Make sure to pay cash to keep you on a budget. We could have even spent less if we wanted. L.A. on a budget is possible, and we hope we showed you that traveling doesn’t have to be expensive. You can still see and eat some amazing food without breaking the bank. Where To Stay in L.A.

When deciding where to stay in L.A. you need to realize how big and spread out L.A. is. You will want a hotel in L.A. that is centrally located. The traffic in L.A. is no joke. It’s actually the city with the worst traffic in the U.S., according to USA Today. See below for more on traffic in L.A.. Once you see the traffic statistics in L.A. you’ll understand why staying in the right part of L.A. is crucial for 2 days in L.A.

We stayed in a Vrbo in Culver City for several reasons:

If you book in advance or are willing to spend a little more money, consider renting a Vrbo in Santa Monica or Venice. Staying in an apartment vs. a hotel gives you the option to cook a meal and save money on eating out in L.A. Most apartments have free parking vs. hotels that charge $20+ a day for parking. Renting A Car in L.A.

Renting a car in L.A. can sometimes be cheaper than a one-way taxi from LAX airport to your L.A. hotel. We rented a car on DiscoverCars.com. We got a compact car for $30 with all taxes and fees. Having a car gives you the freedom to go to those hidden gems not easily accessible by public transportation. When planning out your 2 days in L.A., make sure to look at a map and plan out your days based on location. L.A. attractions may look very close to each other on the map, but it’s not unheard of for it to take over an hour to go 5 miles. L.A. traffic is real, and it can really put the breaks on a fun day in L.A. Try to avoid driving during rush hour.

Here’s a fun L.A. traffic statistic: drivers in the Los Angeles-Long Beach-Santa Ana region spent 81 hours idling in their car on the highway in 2015…sitting in traffic is no fun. The worst highways are the 101 and 405, which are often referred to as parking lots by locals, as it is literally like being in a parking lot.

Not everyone can do L.A. like a movie star. But a weekend getaway on a budget is totally possible.

Have you spent 2 days in L.A. and have any suggestions to add to our L.A. travel tips list? Any L.A. budget places that shouldn’t be missed? We’d love to hear from you! Don’t be shy, leave a comment below. Disclosure: This post is sponsored by OneMain Financial. As always all opinions are our own