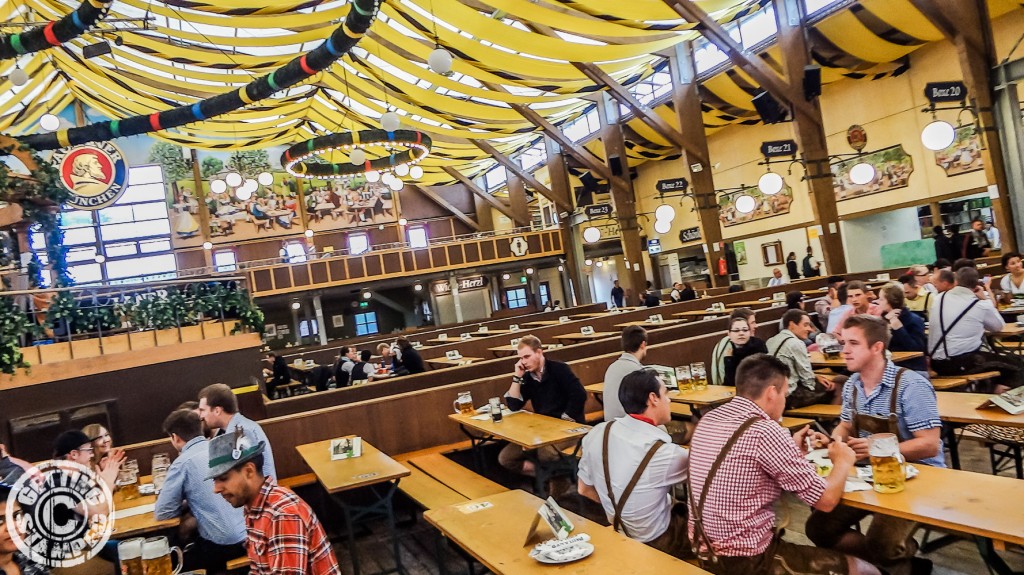 On the weekends this might be true, but visiting on a weekday (as I would advise anyone traveling to do) is pretty easy as long as you are there before the after-work crowd comes in. We were all excited and ready waking up bright and early to get in line to hopefully get a table at the great Munich Oktoberfest. Even with our early rise and planning we still managed to be later than planned (10:30 am). Expecting to have to now fight for a table, instead, we walked right into a nearly empty beer hall. It’s Wednesday, not Saturday. In most tents this is true, but we found a few tents that had a window to buy beer for the poor lost souls without a table, Lowenbrau tent was one. For the tents that do adhere to the no seat, no beer rules there is still a way around it. Making friends with someone that has their postier planted and have them but you one. Or if your social skills are lacking, bribes work well too.

Myth #3 – The HB Hofbrauhaus tent is the best tent Although it may be the best marketed and nicely decorated with real hops hanging everywhere, there was just a bad vibe in that tent. We only spent about 15 minutes in the tent to take some pictures and saw several counts of douchebaggery. Mostly by the security guards. I saw one security guard walking down the alley’s outside the tables, he went out of his way by at least two-step to purposely shoulder check a guest. Then as we were leaving I saw what I thought was a fight but it was to bouncers shoving one small Oktoberfest goer.

Myth #4 – You have to be in full Bavarian gear Lots of people are, but it’s not a requirement. As a side note, not all outfits are created equally. If you are going to do it, do it right and get a decent get up or you might look silly instead of in style. Contrary to what you may have seen in the movies, it’s not quite like that. The tents are very organized and good at handling the crowds. People are drunk, but spirits are high and it’s a fun atmosphere. If someone gets out of hand they are tossed out. The efficiency of the beer tents amazed me. From the beer filling area that operates with army precision to the industrial-sized bathrooms that take it all away. They know what they are doing at Oktoberfest.

Have you been to Oktoberfest before and have any other myth’s to add?

13 thoughts on “5 Myths of Oktoberfest in Munich”