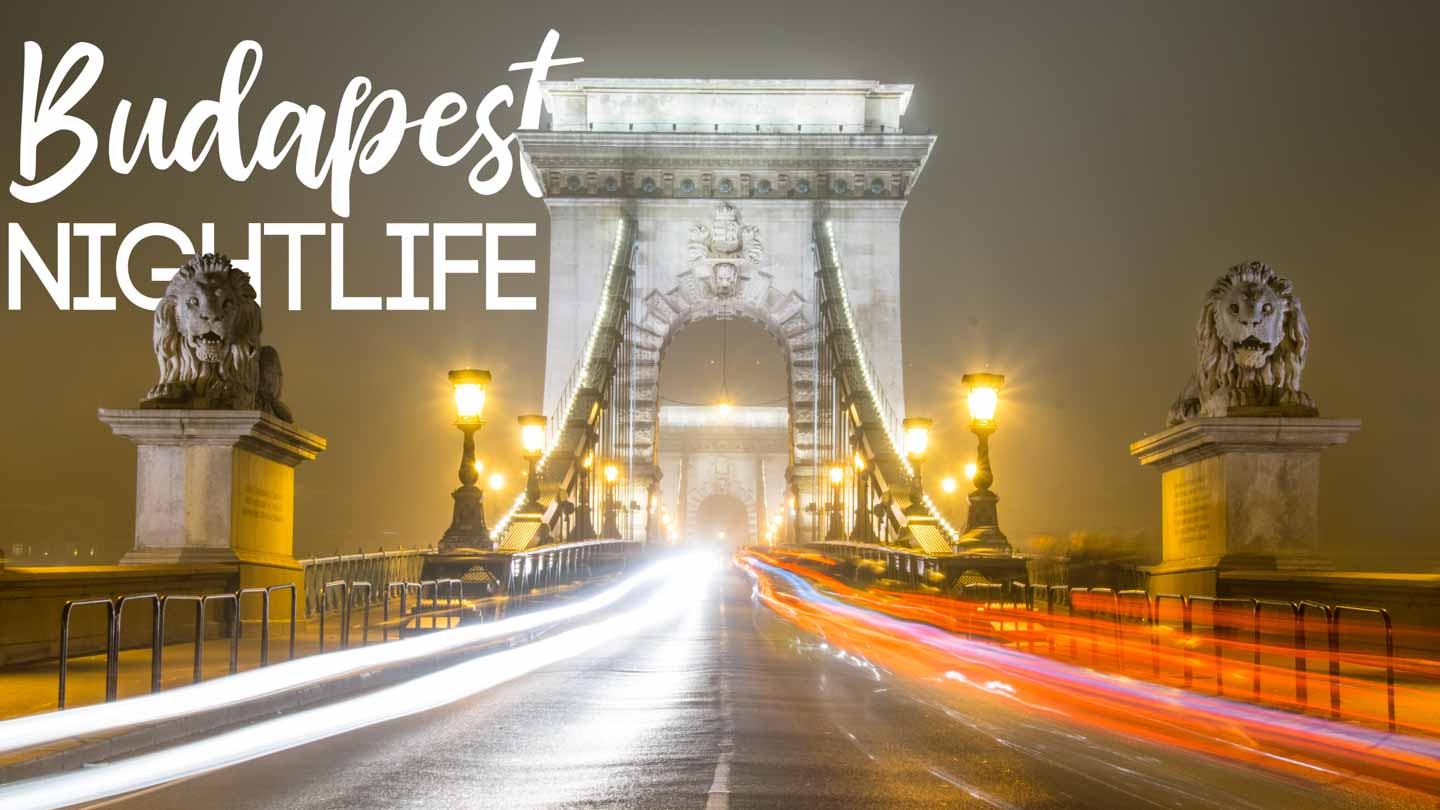 Given Budapest’s history and its architecture, it’s no surprise that it’s the go-to city in Hungary for tourists. Something you may not know is that Budapest is also known to have some of the best nightlife in Europe. The main attraction is the city’s “ruin bars.”

Ruin bars in Budapest are what really sets Budapest nightlife apart from anywhere else in the world. Ruin bars generally occupy abandoned buildings not designed as a bar, making them large and unique. There are ruin bars for everyone from rooftop electronica, and light shows to basement metal shows and everything in between.

*When looking for the best price and biggest selection of hotels in Budapest, check prices on Booking.com. We’ve found they are the best option and have a great cancelation policy.

Best overall hotel in  Budapest – Kempinski Hotel Corvinus Budapest
We stayed at the Kempinski hotel and love it for so many reasons, but one of the best is there is a Christmas Market right out your door. From our room, we could see down onto it. It’s also one of the best locations to stay in.

We’ll stop first at the original. Szimpla Kert defined ruin bars. Being the first established ruin bar in Budapest, they set the tone for the style of these bars. Large, furnished with old furniture and a few artistic pieces.

Add some alcohol, and you have a recipe for success that has spread across the city. Szimpla Kert is still one of the most popular Budapest ruin bars to check out. Featuring a courtyard garden during the summer you’re sure to get the feel of ruin bars here.

If you partaking in Budapest’s nightlife isn’t your thing make sure to at least stop by during the day. Szimpla Kert is always on our Budapest itinerary. 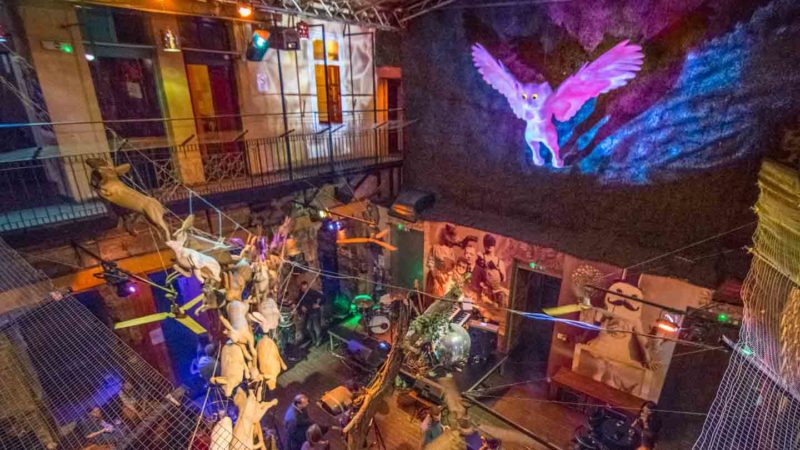 This ruin bar met the fate that may eventually be that of most ruin bars. Because ruin bars occupy abandoned buildings, they are often not owned by the bar but rented or leased. Meaning that at the end of contracts, the building owner can try to sell the building or simply not renew the contract, leaving the bar to look for a new home.

Luckily for Instant, another ruin bar with some extra space, Fogas ház, allowed them to move in. Instant got to keep its unique style of psychedelic light shows and underground electronic music, and Fogas ház keeps its style.

Related Article: Top Things To Do In Budapest

Looking for a different mood than the electronica-hipster playgrounds of above ground ruin bars. Head underground in District VII Almássy u. 1, and you’ll find yourself in an underground nightclub with graffiti and rock memorabilia lining the walls.

Filter Klub hosts musicians almost every night, usually of the rock or metal genre, but you can find your occasional ska or reggae show there too. Offering a unique experience to other ruin bars Filter Klub is a must in the Budapest nightlife scene.

Doubling as a hostel, this ruin bar is notorious for its wild parties. Advertising itself as a party hostel, the staff is sure to help you find a good time. Grandio features a large open courtyard surrounded by the balconies of the hostel.

You don’t have to stay at the hostel to partake in the party as there is a 24/7 bar. Furnished with the familiar flea market furniture and unique murals and art pieces, Grandio fits the bill of a ruin bar while also serving as a hostel.

Seeing as how many of these ruin bars occupy the old Jewish District of Budapest that was left empty after WWII, it’s only fitting that a ruin bar influenced by Jewish culture operates here.

At night, the courtyard transforms into a garden party area, with a bar and musical shows almost every night, from acoustic solos to techno groups. Given its location in the center of Budapest, nightlife Mazel Tov should be on your list for any sort of bar tour or crawl.

Originally founded in 2009, Fogas ház has undergone a transformation since its founding. This one building now hosts four different clubs, Fogaskert, Instant, Robot, and Lärm, each with its own niche. The robot is where to go if you want to catch some rock shows, and if Electronic music is more your thing, you can head to Lärm.

Instant features a unique ruin bar experience with light shows and electronic music, while Fogaskert can provide you with your “traditional” ruin bar experience of worn-out furniture, odd art pieces, large spaces, and cheap beer. Fogas Ház has recently planted itself as the party center in the capital with such a variety of nightlife all under one roof.

Related Article: Everything You Need To Know Before Visiting The Great Market Hall

Located in District XIV, Corvin Club is located in an abandoned department store built during the communist era. This ruin bar offers a rooftop terrace that is open during the summer. Up here, they host all sorts of events and of course, drinks.

Events range from movie screenings to techno shows, and Corvin Club is known for its electronic music. From autumn to the beginning of summer, patrons gather down one level in a large area illuminated with glow lights.

Kertem, meaning “my garden” in Hungarian, is located on the southern side of Városliget, a city park. Here they offer a wide range of food and drinks to enjoy in their outdoor open area. This kid-friendly ruin bar also offers occasional events such as music or DJs.

Located in a beautiful park setting with ruin bar furnishing, Kertem is known for being a nice place to relax, have a few drinks, and enjoy the events or even just the scenery.

Nightlife in Budapest doesn’t revolve around the ruin bars. For the party animals out there, get yourself a ticket to a Szechenyi Bath party. These baths are naturally heated and function as spas, but almost every Saturday night, the spas put on a light show, bring in a DJ and host one hell of a party.

Tickets are recommended to be purchased online and can be found here. The only requirement to enter is that you have a ticket and that you’re wearing a bathing suit, although flip-flops are recommended (for obvious reasons). If you’re looking for a wild night and a changeup from ruin bars, be sure to reserve a Saturday night for a trip to a Bath Party. 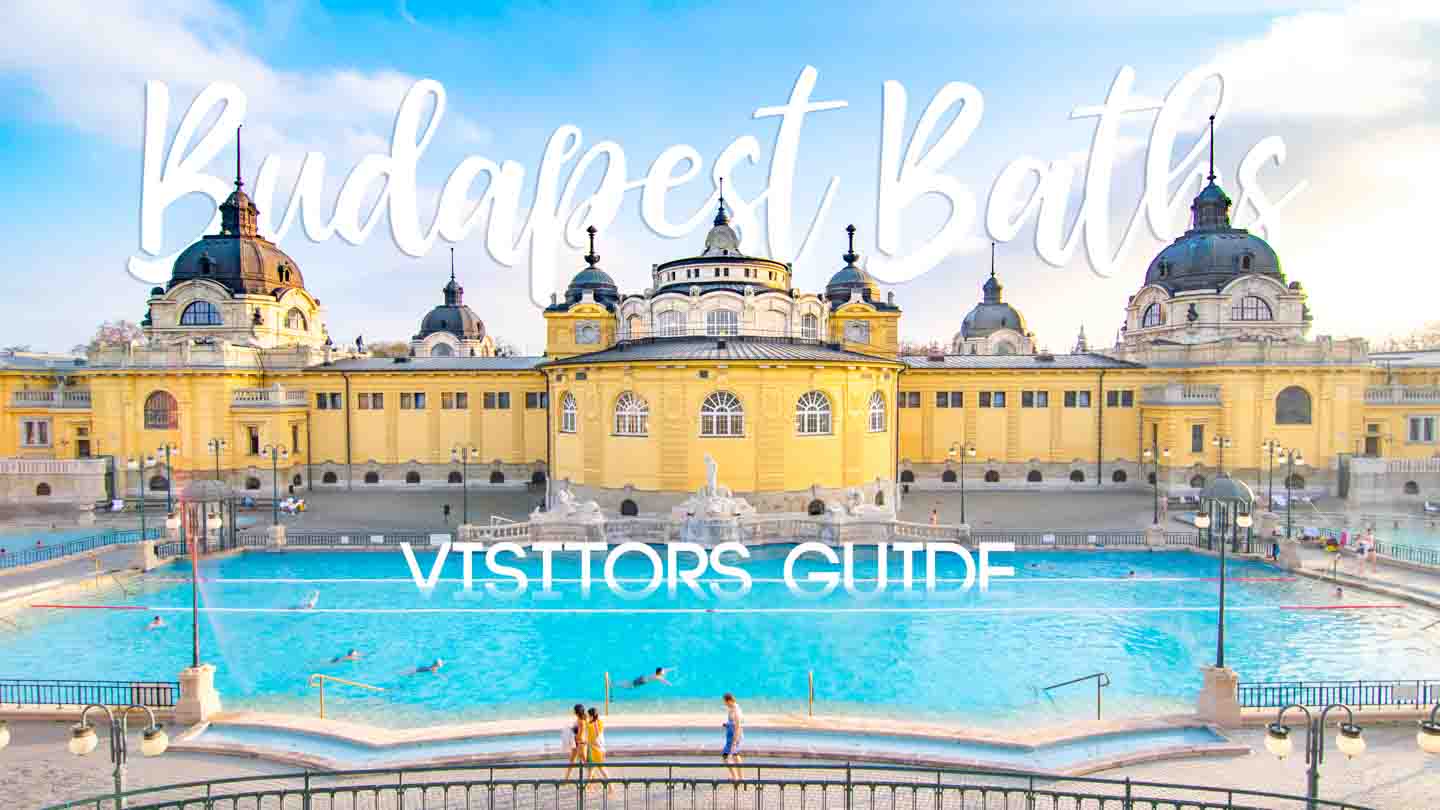 An absolutely incredible place to visit, Budapest is one of the prettiest cities in Europe, and no visit to Hungary’s capital is complete without stopping by one of the beautiful… 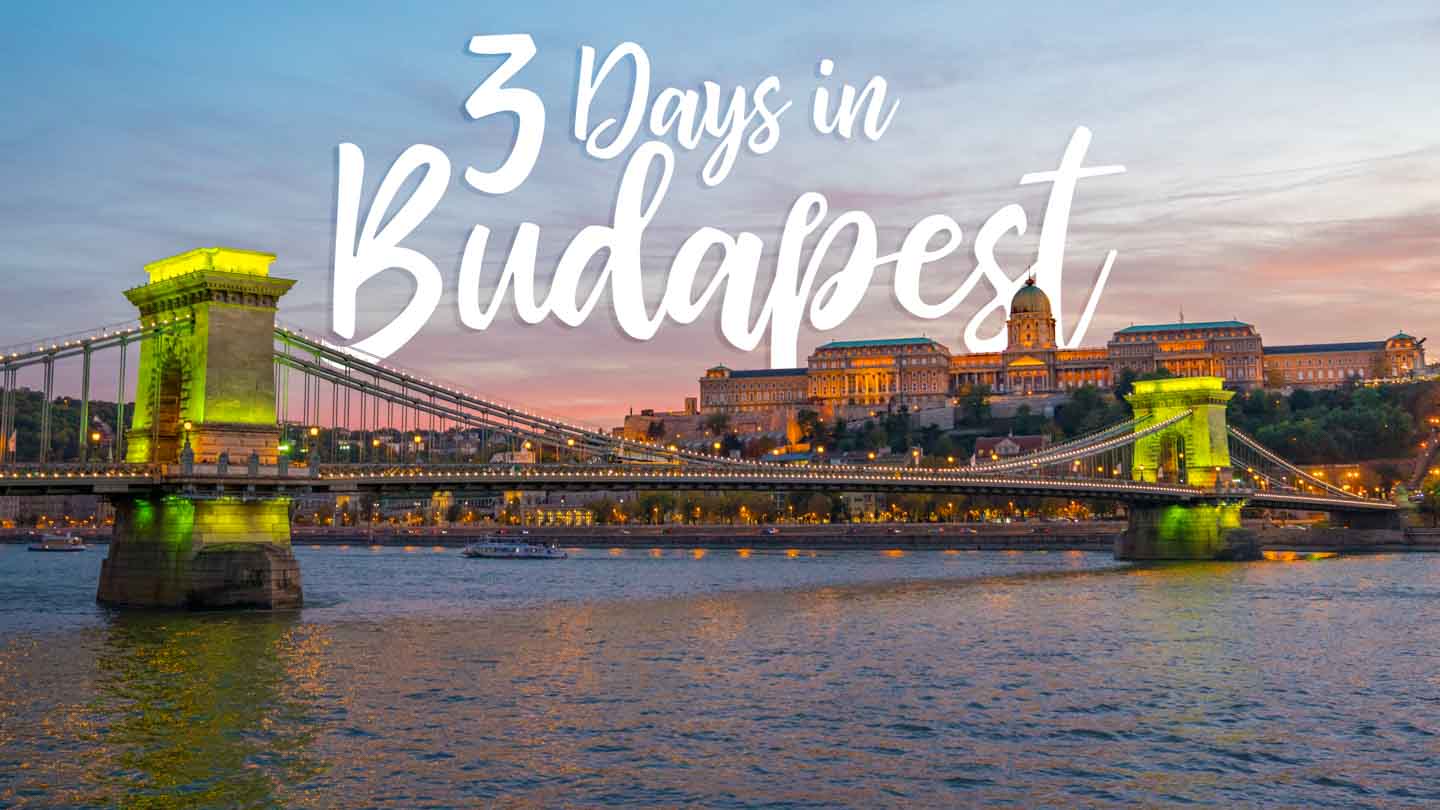 From the Romans and Turks to the Austro-Hungarians and Soviets, Budapest’s mosaic of influences makes it a fascinating place to visit. Situated along the banks of the Danube, the capital…

Given Budapest’s history and its architecture, it’s no surprise that it’s the go-to city in Hungary for tourists. Something you may not know is that Budapest is also known to…

Have you experienced the Budapest nightlife scene? What are some of your favorite spots and ruin bars in Budapest?