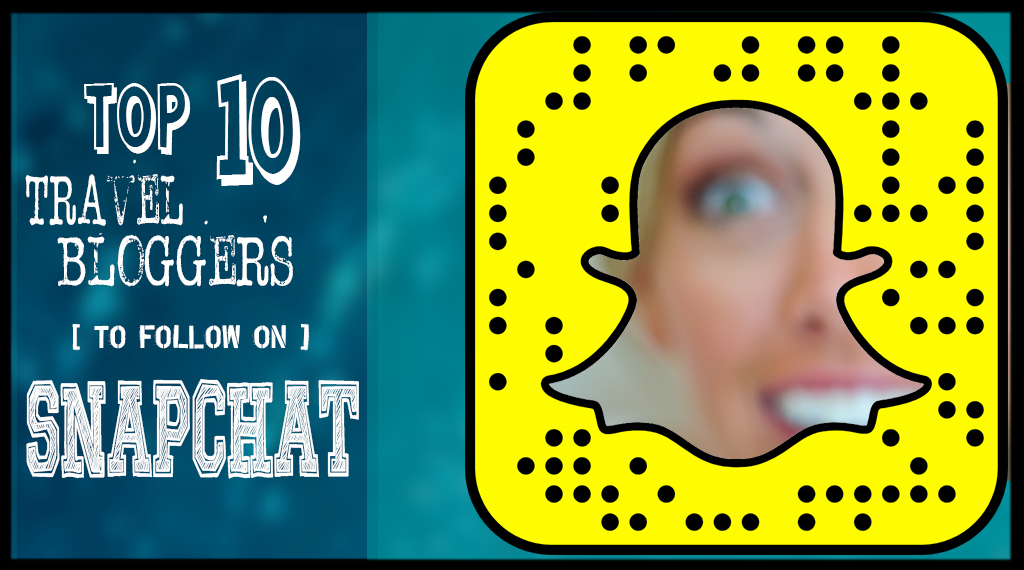 If you haven’t noticed already I am obsessed with Snapchat. I even got my gramma on Snapchat, it did require writing her a Gramma’s guide to Snapchat post but none the less she’s snapping along! I love sharing with everyone our day-to-day lives as we travel this amazing world. You’ll get a peek at where in the world we are and what we are up to, where we are sleeping, what we’re eating, what we are seeing, the crazy adventures we get into, and the lovely mishaps that come with traveling.There are several travel bloggers on Snapchat you can follow right from your desk. Why not come on vacation with us via Snapchat travel?

Snapchat is more than just sharing my travels, I love following my fellow travel bloggers on Snapchat too. I feel like I am traveling along with them through their Snapchat travel stories. WARNING: Some of them will make you starving as they share snaps of an amazing Thai meal on the beach in Koh Lipe Thailand or street tacos in Mexico… If I had to pick my favorite snapper it would be Drew. Drew runs the blog The Hungry Partier, which as the names says he likes to party. Originally from Arizona but alumni of University of Wisconsin-Madison currently ranked #3 party college in America! Go Badgers!  This summer his Snapchat was full of music festivals, clubs all over Europe by night and sightseeing by day. Drew’s time in Europe is over, thanks to the 90-day visa rule…last time I checked he was in Georgia staying with a Nigeran couch surfing host. Ever wonder what India is really like? Carlo & Florence run the travel blog Next Stop Who Knows are originally from Ireland but have been traveling the world nonstop since 2013.   These two are currently snapping daily life in India for the next 3 months. You will see everything from chaos on the streets of Mumbai, cows in the street, people bathing with gutter water, and recently a visit to a temple housing 15,000+ rats Matt is no stranger to the travel blogging scene, his blog Expert Vagabond was one of our inspirations to take our RTW trip and start Getting Stamped. Last month he was snapping his way around Ireland as he was retracing his family heritage with his parents. Since then he has been in NYC, Miami, and his last snap was in Playa del Carmen Mexico where he’s sitting still for awhile…until he gets the travel itch again! Erin, along with her husband and two children make-up the traveling family Explore With Erin. They left Australia in 2012 and have been exploring the world with their 2 young kids ever since. They just started a US & Canada road trip like our #epicUSroadtrip. Erin is currently snapping in Canada. Edna from Expat Edna has been living & working abroad since 2008. Originally from Pennsylvania, she has lived & worked in Singapore, China, Italy, and Paris. She’s currently in Paris snapping away, but just last month she was in Italy making me hungry with all her tasty snaps! Kate quit her job at 2010 and has been traveling the world as a solo female traveler running the travel blog Adventurous Kate. She just returned home to Boston after a summer snapping in Europe. I loved watching her snaps in Latvia, Sicily, and Scotland. One day Anna is London, the next day in Turkey, and the next week eating tacos in Mexico. Anna’s blog Anna Everywhere is so fitting for this globetrotter. You may even see me make a few appearances in her snaps, we’re both living in Playa del Carmen at the moment. Stephanie from Travel Break calls L.A. her home base, but you will rarely find her there. Stephanie gets around the world, currently in Bangkok. Just a few weeks ago she was playing on the beaches in Cabo with her best friend. You never know where she will end up next. Ryan is the man behind Pause The Moment is originally from New England but he hates the cold…therefore, he has been basing himself in Playa del Carmen, Mexico the past year. He said adios to his corporate job back in 2010. This summer he too was all over Greece, and currently on a boat in Turkey. Yep, I am that person to include themselves in a list! If you haven’t been following us on Snapchat over the past 6-months you have really missed out…we had 2 months of snaps from our overland African safari and the past 2 months of our #epicUSroadtrip. BUT it’s not too late to join in on the fun. The rest of 2015 is going to be a whirlwind, we will be in 10 countries before Christmas! Make sure to catch every moment of it on Snapchat.