Traveling to Myanmar? Most tourists don’t realize how many things to do in Mandalay there are and that they should spend at least 2 nights in Mandalay.

On our recent trip to Myanmar, we had a direct flight from Chiang Mai to Mandalay and spent 2 nights in Mandalay before traveling to Bagan. We didn’t expect much in Mandalay but were pleasantly surprised and glad we included Mandalay on our Myanmar itinerary. We’ve put together this Mandalay travel guide and a list of what to do in Mandalay to help plan your trip.

Before you travel to Myanmar check the visa regulations for your nationality. We are American citizens and had to apply for a Myanmar visa online prior to travel. We applied for the Myanmar eVisa online and were approved within 3 days.

There are hotels for every budget in Mandalay. There are some gorgeous romantic ones for those on a honeymoon in Myanmar. We suggest staying at a Mandalay hotel that is located right in the city and close to restaurants.

We stayed at the Hotel A1 for $31 a night which had everything we needed. It was located within walking distance to the best restaurants in Mandalay. Our room was basic but clean with AC and hot water – all that we really needed. We were only in our room for 7 hours a day as we were so busy exploring all the things to do in Mandalay.


*When looking for the best price and biggest selection of hotels in Mandalay check prices on Booking.com, we’ve found they are the best option and have a great cancelation policy.*

Getting money in Mandalay is no problem, there are ATM machines throughout the city. There were 3 working ATM machines at the Mandalay airport, this is where we withdrew money. There was also an ATM right across the street from our hotel, Hotel A1. Every ATM machine had a maximum withdrawal limit of 300,000k which is around $220 USD.

In previous years there were no ATM’s and tourists had to bring new USD and exchange money in Myanmar. This is no longer needed however, we suggest bringing some cash in $USD just in case you are in a rural area without a working ATM. If you are staying at central Mandalay hotel you can easily walk to most places. There are very few traffic signs and most intersections are uncontrolled, so be careful when walking. Taxis from most hotels to a restaurant or the ferry station are 6,000k one way or 10,000k round trip. We had our hotel call us a taxi to go to dinner and the taxi driver literally waited in the car outside for 2 hours. If you are taking the boat to Bagan from Mandalay arrange your taxi the night before. We suggest booking your boat online here in advance or book a private driver for $69 to take you from Mandalay to Bagan on Viator here.

Tourists can rent motorbikes or bicycles in Mandalay but we wouldn’t advise this due to how chaotic the traffic is. We hired a private driver for a full day where we wanted to hit all the things to do in Mandalay. See below for our private driver details and prices.

There is a wide range of restaurants in Mandalay with something for everyone. We originally asked our hotel for restaurant recommendations and they recommended a few Burmese restaurants. They recommended Shan Ma Ma which is the #3 on TripAdvisor and it was packed but further, inspection we noticed all the food was pre-cooked and sitting in pots for who knows how long. We know that this has the potential for food poisoning so we opted for higher-end made to order restaurants.

We ate at the following restaurants during our time in Mandalay and would recommend them all. They all were tasty and we didn’t get sick. It’s worth spending a few extra dollars a meal in Myanmar, no one wants to get sick on vacation.

Getting To and From Mandalay

After our time in Mandalay, we headed to Bagan and then to Inle Lake. We’ve put together the following guides on how to get from Mandalay to other Myanmar destinations.

Mandalay is a great starting or ending point when traveling to Myanmar. The international airport several international destinations.

Taxis at the Mandalay airport are reasonably priced and they have a set rate from the airport to Mandalay hotels.

There are several taxi kiosks and they all spoke English. We just told them our hotel name Hotel A1 and they knew it. The drive was an hour from the airport which is located 40 kilometers outside of the city. If you don’t have local currency, you can pay the Mandalay airport taxi in USD it was $10 for a private taxi but we opted to pay in Kyat.

Remember if no drones are allowed in Myanmar, they will be confiscated at the airport but returned when you leave (if you leave from the same airport). If you travel with a drone like we do you might want to look for places to store you drone before traveling to Myanmar. Traveling with a drone is amazing make sure to ready my drone guide to find the perfect drone for you.

Things To Do In Mandalay

We hired a private driver in Mandalay for the day to bring us to all the below things to do in Mandalay. They are listed below in the order we visited them.

Start your day exploring all the things to do in Mandalay bright and early at the U Bein Bridge for sunrise. The U Bein Bridge is the oldest and longest teakwood bridge in the world that was built back in 1849. The bridge is 1.2 km/ 0.75 miles long and used by the local people to cross Taungthaman Lake.

The bridge has made every tourist’s list of things to do in Mandalay and that is why we urge you to come early in the morning. When we were at the U Bein Bridge for sunrise there were maybe 15 other tourists but if you come for sunset at U Bein Bridget there will be 100’s of tourists. If you can’t make it to sunrise we suggest booking this private sunset U-Bein bridge tour to ensure you get an epic spot to watch the sunset in Mandalay. We suggest booking your private driver here for only $61 for 10 hours so you don’t have to negotiate with taxi’s in Mandalay. Our driver brought us to Mingun Pahtodawgyi and all the Mandalay attractions in this article. The Mingun Bell was made to go with the Mingun Pagoda but since the Pagoda was never finished it wasn’t put in place. The Mingun Bell weighs 90 tons and is 13 feet tall. Until the year 2000, it was the world’s largest ringing bell but has now been eclipsed by another in China. It’s worth a quick stop to jump out and give it a ring.

Hsinbyume Pagoda is a gorgeous white temple within walking distance to Mingun Pahtodawgyi. This intricate temple in Mingun is not nearly as busy as Mingun Pahtodawgyi. If you are lucky you can get a picture of the monks walking down the white steps to the pagoda. It is also often called Sat Taw Yar Pagoda or Mya Theindan Pagoda.

The Umin Thonse is often referred to as the 30 Caves Pagoda because there are 30 cave entrances to enter the pagoda. The Pagoda is located on Sagaing Hills which has an amazing view looking out over to Mandalay and the river. Inside the pagoda, there are 45 Buddha images in a crescent-shaped colonnade.

Visit Inwa or Ava as it was previously known, Myanmar’s most famous old capital. Inwa was the capital city between 1365 to 1842 and was abandoned in 1839 after an earthquake that leveled the city. The city was never rebuilt and the King decided to rebuild a new palace and move the government to Amarapura.

Inwa is a top attraction in Mandalay for tourists where you can still see remains of the capital city. To reach Inwa, you’ll have to take a quick ferry for 1,000k. Once on Inwa, there will be horse carts to show you around. Please note the drivers were VERY pushy and we decided to walk where we witnessed several of the horses getting beaten by their drivers. We would advise not supporting the horse drivers. 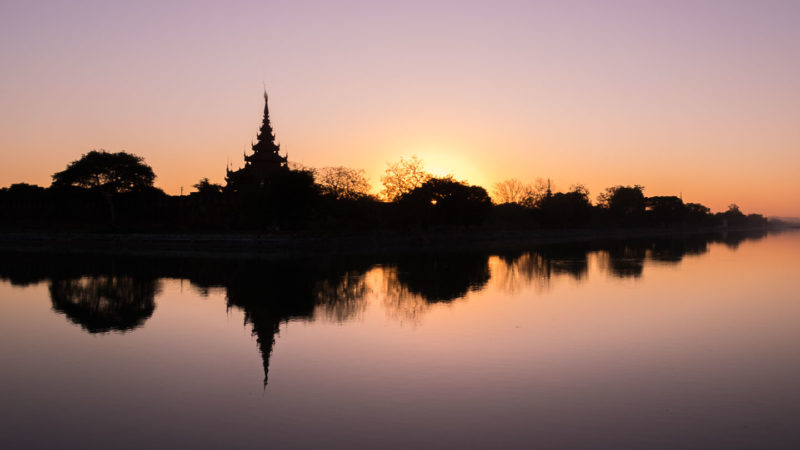 If you are staying at a central Mandalay hotel you can most likely walk here or take a taxi. The entrance to the Mandalay Palace is only on 19th street.

The  Shwenandaw Monastery is a gorgeous wooden monastery carved from teak wood. It’s also referred to as the Golden Palace Monastery. The monastery was originally part of the Royal Palace in Amarpura but when the capital city moved to Mandalay so did the monastery. It was literally taken down and rebuilt in 1857 where the King actually lived in it. After his death, it was turned into a monastery.

The highlight at Sandamuni Pagoda is the largest iron Buddha cast in 1802. The huge golden pagoda with tons of white stupas surrounding it make for a great photo. A visit to the pagoda is worth it as it is nearby several of the other things to do in Mandalay on our list. There are several companies that offer tours that will hit all the best things to do in Mandalay in one day. If you are only staying in Mandalay for two nights we highly suggest booking in advance so that you aren’t scrambling to book a tour on your only free day for sightseeing in Mandalay. The following tours are bookable online on Viator.com a TripAdvisor company.

We opted to hire a private driver for the day to create our own custom tour and hit all the things to do in Mandalay. We found our driver Ko Fatty by googling the best driver in Mandalay, which brought me to his Facebook page.

We sent him a message and within an hour he messaged back. We let him know where we wanted to go and we agreed upon a price. He picked us up at 5:45 am so that we could get to sunrise at U Bein Bridge and dropped us off at 6 pm after watching the sunset at Mandalay Palace. We paid 55,000k for what he called a 5 city tour. We highly recommend Ko Fatty. Send him a message or email and he’ll give a reasonable price, tell him Hannah and Adam from GettingStamped sent you.

We hope we convinced you to spend a few nights in Mandalay and that there are a lot of things to do in Mandalay.