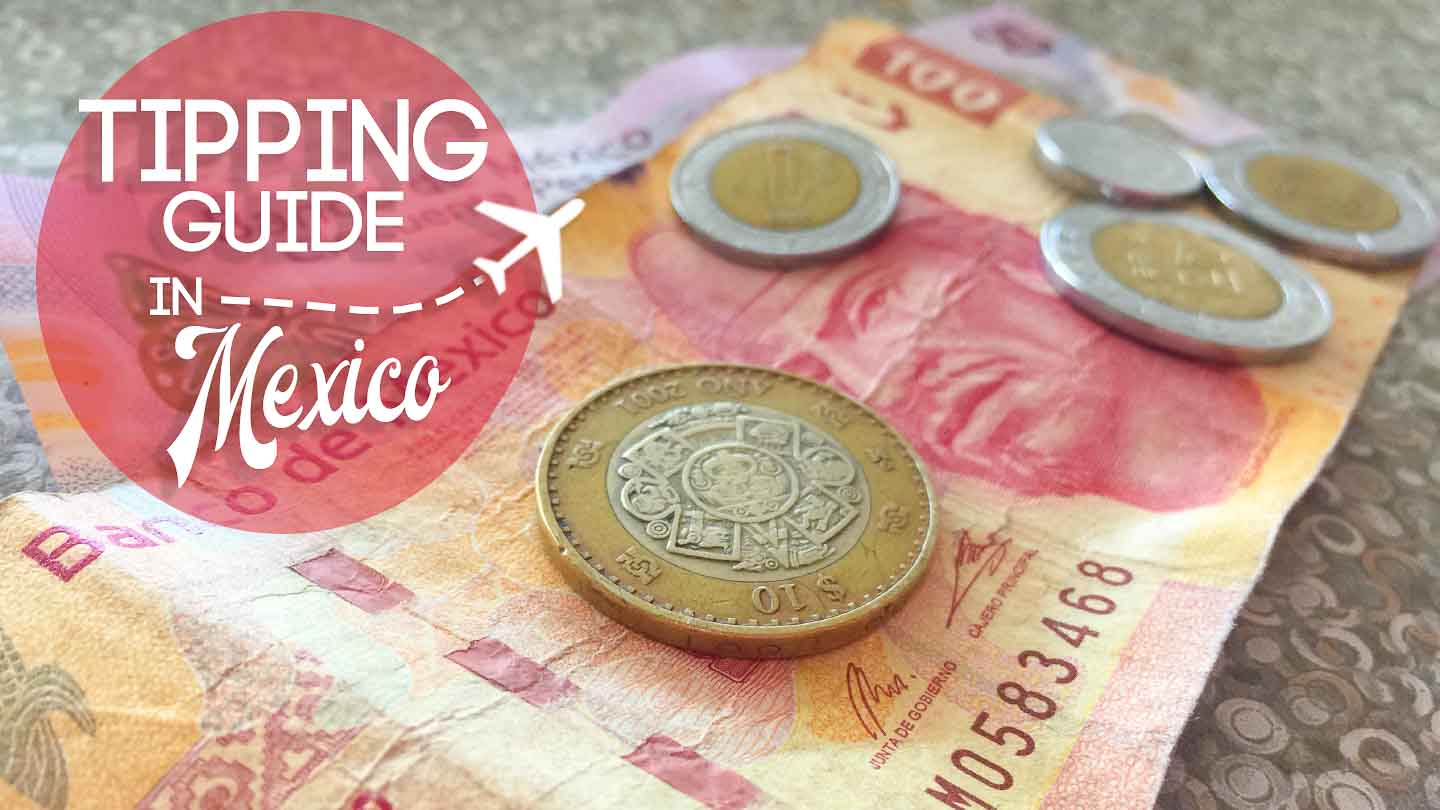 Understanding when and where to tip in Mexico can sometimes be difficult, especially if it’s your first time in Mexico. We are Americans so we are no strangers to tipping but we learned a thing or two about tipping in Mexico after living in Playa del Carmen.

We’ve put together this guide to tipping in Mexico to help you know who to tip and how much to tip.

Do you tip in Mexico? YES

We have tried to cover all cases in which visitors may run into while traveling to Mexico and have services that might require a tip. In Mexico, tips are always appreciated and sometimes very much expected.

You can tip in major currencies like US Dollars, Euros, and Canadian Dollars. However, it is best to tip in Mexican Pesos or US Dollars. These are the easiest for the service providers to use and exchange. Tipping at All-Inclusive Resorts in Mexico

If you’re staying at a tipping policy you will know and it’s best to have some dollar bills with you as you’ll find yourself getting your drinks faster this way, but this is a prime example of why some resorts don’t allow it they want all guests treated the same.

The Riu Resorts you’ll definitely see people tipping but places like Sandals Resorts it’s a strict no-tipping resort. When we stayed at the Grand Palladium we rarely saw tipping at restaurants.

If you’re staying at an all-inclusive you’ll most likely have a shuttle bus from the airport to the resort arranged. If you’re flying into Cancun and looking on how to get to Tulum a private shuttle is the easiest, fastest, and often the cheapest option.

In order to get the best price book online here, you won’t get the same price at the airport. They offer shuttles from Cancun airport to Playa del Carmen, Tulum, Cancun hotel zone, Isla Mujeres, Cozumel, Akumal, Holbox, Puerto Moreles, and Puerto Aventuras. What to tip at a Restaurant in Mexico?

The amount of tip will depend on the type of restaurant. Some places tips are expected, and others you might offend if you leave a tip. Here is how to navigate the tipping customs at restaurants in Mexico.

Waiters in Mexico get paid very similar to those in the USA – very little. Waiters on average make $2.13 an hour and depend on tips. We try and tip 15% depending on how large the bill was and the quality of service.

We would always suggest tipping a minimum of 10% at restaurants in Mexico. Make sure to check the bill and see a service charge for gratuity was included, several higher-end restaurants will include this on the bill.

Most beach clubs in Mexico will have waiters that will come out take your order and serve you at your beach chair. You should tip them like sit down restaurant waiters or even better if they gave you a good deal.

Beach clubs typically have a minimum consumption charge per person. For example at Xpu Ha Beach at Serenity Camp Beach Club it’s 500 pesos per person which is easily consumed with a few drinks and lunch. Sometimes places will say the seats are only for hotel guests because they are busy and if they give you a chair make sure to throw them an extra 100-300 pesos.

Some of the best food you’ll find in Mexico comes from small casual eateries full of local people. At these types of places, a 10% tip is customary. Avoid over tipping in order to fit in.

Suggested Tip: 10% of the total bill

Street tacos in Mexico are some of the best and you’ll get a taste of authentic Mexican tacos. It is not customary to tip a street food vendor in Mexico. Grab a plate of cheap tacos and sit on plastic chairs or the curb and chill with the locals. Make sure to have pesos and smaller bills are best.

Suggested Tip: None or round up and leave a few pesos

No need to tip at fast-food restaurants or coffee shops like McDonald’s, Starbucks, KFC, etc. If a server doesn’t come to your table no need to leave a tip.

Tipping at Bars in Mexico

How much to tip in Mexico at bars will varies bar to bar. If you’re at a beach club in Playa del Carmen or sit down place, gratuity will most likely be added to your bill and there is no reason to add an additional tip.

We always suggest tipping on the first drink around 10 pesos and then see how the service is when you go back. If you find yourself sitting at the bar chatting with the bartender for a few hours and you’ve had a few rounds leave 50 pesos or so.

What to tip Taxi Drivers in Mexico

We personally try and avoid taking taxis in Mexico, as they are typically a hassle to get a reasonable price. If you think you got a good deal then a small tip is fine, but just a small tip 10-20 pesos for a short ride.

If you think you got a terrible price try and have the exact change. Avoid over tipping taxi drivers as this will lead to higher prices.

If you’re staying at an all-inclusive resort in Mexico or nicer hotel they will most likely send the bags to your room. If you’re there to tip great, if not don’t sweat it. When deciding what to tip we always suggest factor in if there were several flights of stairs the bell boy carried your bag or was it raining out, etc. You

Tipping housekeepers in Mexico hotels are just like any other place. Some hotels will have an envelope for you to place a tip, if there is one then the housekeepers expect tips. If there is no envelope make sure to leave the money in an obvious spot for them or leave a note saying “Thank You” that way they know the money was left for them to take.

You could leave your tip daily or at the beginning of the trip but if you wait to tip to the end you possibly would have gotten better service during your trip had the housekeeper known about the tip.

Tipping at the Spa in Mexico

If you just had an amazing massage and left feeling like $1,000,000, wouldn’t you feel guilty not tipping something? I would! If you are staying at the resort check the bill and see if gratuity was added, and if it was it’s really up to you to leave extra. I would also tip at least 10% but up to 20% if the massage was amazing and they listened to the areas & pressure I wanted.

What to tip a Tour Guide in Mexico

If you hire or a guide at Tulum Ruins or go on a cenote snorkeling trip you should always tip the guide and even the driver. If you had an amazing day and your tour guide was full of useful information you should thank him with a tip.

If your trip just has someone that drives you from one attraction to another and gives you a ticket, etc. then just tip the driver. Now if the driver drives like a madman and you ask him to slow down and he doesn’t then I wouldn’t tip him.

Related Article: Diving in The Pit Cenote and Cenote Calavera aka The Temple of Doom

Suggested Tip Guide: $5-10 per person for a full day tour

Dining out in Mexico it’s very common for local musicians and mariachi bands to come in and play. After a song or two, they will walk around with a hat/cup for you to place a tip. We typically leave a little something or more if they were really good. The mariachi bands will sometimes come over to your table and you can say no thank you but if you let them play they will expect a tip.

Related Article: Things to do in Merida Mexico

Suggested Tip: 5-20 pesos for playing to the general restaurant

Suggested Tip: 20-50 pesos for a Mariachi band playing a song at your table

We always head off on some Playa del Carmen day trips and rent our cars so we can explore on our own.  Before returning the rental car you’ll need to fill up with gas. In Mexico, gas stations are full service so they’ll pump your gas for you as well as wash the windows.

When filling up we always suggest having the exact change and then a few pesos for a tip. It’s another one of those odd places where you tip in Mexico that we haven’t seen other places in the world.

Watch out for scams – Make sure to read this article Renting a car in Mexico so you know about potential gas station scams in Mexico.

Suggested Tip: 10 pesos or leftover coins from your purchase

This is a strange one to get used to. After living in Playa del Carmen for a few weeks we noticed the locals would tip the person who bagged their groceries at Walmart or Mega.

We later learned that most of these people were not employees but they worked for tips. Everyone tips them, even the locals who don’t have a lot to spare. We typically gave them whatever small coins we had, it would range from 5 pesos to 20 if we had a bunch of bags.

Suggested Tip: 5-20 pesos per purchase depending on the number of grocery bags

If you’re having a destination wedding in Mexico or living there as an ex-pat you’ll find yourself at the hair salon in Mexico. Salons in Mexico are really reasonably priced, on average leave a 10% tip to the stylist.

You won’t see bathroom attendants all the time but here and there you’ll find them at attractions, restaurants/clubs, and a few hotels. If there is a tip jar and you can tell that their work station is the bathrooms and they are in there the whole time I’d definitely tip them.

Can you imagine being in the bathroom for hours? If you frequent the bathroom several times in the night you don’t need to tip every time. They’ll be super appreciative.

Places in Mexico to Visit Before or After Playa del Carmen

If you’ve got more time to explore Mexico there are some gorgeous places in Mexico nearby you should check out. If you can’t on this trip consider them on your next trip. Make sure to check out some of our other Mexico articles to fuel your wanderlust. We hoped we broke down the tipping culture in Mexico for you. Do you live in Mexico and have any other suggestions on who to tip in Mexico?